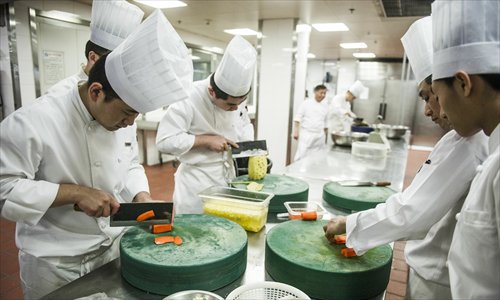 If you’ve ever imagined yourself slipping into chef’s whites and heading for a day’s work in the hustle and bustle of a restaurant kitchen, you’ve come to the right place. You’ll also know that people rarely just walk into a role as a chef; it takes time, training and lots of dedication.

You may have to slowly climb up the ladder, starting as a kitchen porter perhaps and working your way up. A sous chef job role is a good position to aim for; it means you’re not quite the head of the kitchen but you’re pretty much near enough.

Also known as a deputy chef or su chef, the sous chef is essentially second in command to the head chef. He or she is responsible for food production and may occasionally take on the role of head chef in the absence of the chef.

While you’re slightly lower down the culinary pecking order as a sous chef, you’re not far off the main event. As a deputy chef, you’ll be a vital part of the successful and smooth running of the kitchen; without you, the head chef will struggle and meals may not make it to their diners.

So, where to start? Of course, becoming a sous chef is predominantly down to whether you have the skills to do the job. While some may start out as a kitchen porter and work their way up, others will attend chef’s school and begin in a role like this.

It is, however, pretty standard for chefs in any kitchen to have obtained a GNVQ level 1 and 2 in food preparation at commis chef level. You may find your employer lets you take a course like this on a ‘day release’ basis, which will give you the chance to continue earning while you’re developing your skills.

As a sous chef, preparing food – everything from chopping vegetables to plating up – shouldn’t faze you. As the first person other chefs look to in times of stress, it’s also vital you can handle the pressure of an often fast-paced environment, as well as think on your feet. Strong communication skills are ideal, too; you’ll be liaising with everyone from the head chef to the front of house staff, so make sure you’re well-liked and your day-to-day duties will prove easier to manage.

The good thing is about starting out as a sous chef is there are plenty of avenues for you to take should you later want to progress. A sous chef may have served his or her time as a commis chef, or risen to take on the role as a chef de partie. The chef de partie generally is in charge of one section of the kitchen and this can later prove really useful as you move around the restaurant and into different roles.

Of course, spending time as a sous chef will also stand you in good stead if you’re to eventually train to become head chef. So, don’t look at your sous chef training or role as a means to an end; it could well be the route into your end goal: head chef!